Valued readers, in my last poll, I wanted to see who you predicted would win the World Cup. This was the poll.

Who Will Win the 2010 World Cup?
- Holland
- The Dutch
- Netherlands
- Vatican City
- AARP Soccer Team
- Other (Do not specify)

Voters could vote for more than one option, and polling closed after the final game of the World Cup. As any impartial pollster would do, I hired a statistician and a psychologist to interpret the results. Their findings were astonishing. The statistician gasped, and the psychologist rubbed his greedy little hands together, telling me he’s hit the motherload of potential disturbed clients who need to seek professional help. I couldn't wait to share the results with you.

Let me remind you that I ran the poll the day after the final World Cup game. As a result, the “predictions” of the winner of that game should have been 100% correct. That would be the case if it was a poll of Wall Street Journal readers. But this is Jackie S. Phillips’ blog, where we attract a “different” caliber of readers, a unique demographic of weirdoes, shoplifters, small children, wanderers, and my friend Lisa from Haverford. . . you know, the craziest of the crazy. (Except for you, you’re normal.)

A picture is worth a thousand words, so look at the chart. 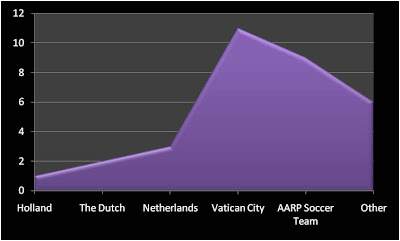 It shows the results and what shape they would take if they were turned into a mountain. Very steep and rocky. Wouldn’t want to fall off of that. My old neighbor Cindy said it looks like a unicorn. She needs glasses. By the way, happy birthday Cindy! She’s going to be around 75 on October 7. She says she’s 60, but I don’t buy it.

The second chart, the bar graph below, is a better picture. It clearly shows that most of the votes identified “Vatican City” as the winner of the 2010 FIFA World Cup soccer tournament. This is a sad reflection of the readers’ grasp of reality. Vatican City is not a soccer team, people. It’s just a city (actually a city-state), but let's not get bogged down with that. The key word is “City.” That’s where the Pope lives, along with lots of priests and Vatican workers. 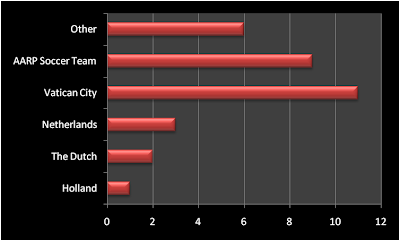 Priests, for those of you who don’t know, are not professional soccer players. That’s why they wear different uniforms. The psychologist told me I should include a picture of a priest and one of a soccer player so my readers could tell the difference, but that would cost extra. So I’ll just say this: contrary to popular belief, no Pope has been on a professional soccer team since 1974, and there has never been a professional athlete priest since the days of John the Baptist.

The second runner up in this poll was the AARP soccer team. Fifty-two percent of the votes said the AARP soccer team won the World Cup. "AARP" is not an acronym for a county name. Many readers asked me if AARP means “Argentina.” Yes, you pointed out that three of the letters in AARP are also in the word Argentina, but AARP and Argentina are still not synonymous, just as USA and USSR were not synonymous. Don’t feel embarrassed if you were one of the confused. Even Connie, whose husband is from South America, got that wrong.

Moving on, 35% of the votes went to “Other/Do not Specify.” I received many impudent e-mails where people did specify Spain as the winner. I have no tolerance for people who don’t follow directions, so I threw out their votes. That is my blog’s no-tolerance policy, which is clearly indicated in the sidebar entitled, “No Tolerance.”

The final statistics were a real treat: 17% of the votes said the Netherlands won, 11% said the Dutch won, and 5% said Holland won. Don’t you realize Netherlands, the Dutch, and Holland are all synonymous? They should have gotten an equal number of votes. You think AARP and Argentina are synonymous, yet you have no clue about this? The psychologist and the statistician both laughed about that one. (I'm not mean like that, so I laughed later, when no one was watching.)

In conclusion, Spain really won the World Cup. Even an octopus could predict the winner better than the readers who took this poll, but that’s because an octopus, much like a potato, has eight eyes.

P.S. Roy Halladay just pitched a no-hitter in the National League Division Series. Go Phillies! (And, no, there will not be a poll on that.)
Posted by Jackie S. Phillips at 8:34 PM