What Drives a Marriage? 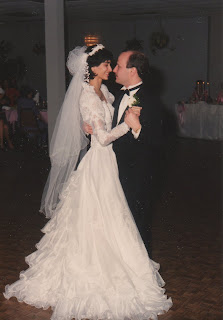 Two of my friends recently had summer weddings. Neither invited me to the festivities, but I guess I can’t blame them. I shouldn’t have made passes at their fiancés. My husband pointed that out when we were in the waiting room at Jiffy Lube today. Perhaps he’s right. Live and learn.

I always get butterflies in my stomach when I enter a Jiffy Lube. Bad memories. In fact, I hate being a female and entering any mechanic shop all by myself. I feel like the mechanics prey on women’s ignorance about cars. Is that a stereotypical thing to say? Well, too bad, I said it. If you're naive and a female, you're probably going to be cheated, even on something as simple as an oil change.

The first time I got my oil changed, I was 21. My husband, Joe (back then he was my fiancé), had forewarned me that the mechanics might try to scam me into paying for things that aren’t necessary. Sure enough, the mechanic called me over and said the color of my car’s oil indicated that I needed to change the differential fluid. I said, “No way, Jose!”

The mechanic also told me my brake line was somehow severed. Did Jose think I was born yesterday? As much as he pleaded for me to be reasonable, I stood my ground and told him to buzz off. I felt proud as I drove off to morning mass. But when my car crashed through the church right onto the altar, barely missing Father Steinberg, I realized maybe not all mechanics lie. Again, you live and you learn, but God bless the unfortunate altar boy, Abdul, who took quite the hit. He left Catholicism the next day, saying I smacked the Islam right back into him.

After that incident, Joe took care of all the typically manly stuff, and I focused on looking pretty. My husband eventually got fed up of my ignorance and told me it’s time for me to overcome these issues. He reminded me what he told me two years before, “Just go to Jiffy Lube, get your car done, and don’t let them do anything extra.”

Simple enough. We lived just outside of Philadelphia at the time, so one Saturday morning, I woke up early and went to a seedy looking Jiffy Lube in seedy Bensalem without Joe’s coaxing. The bays were all empty, and several mechanics were standing around waiting for a customer. I felt very awkward, being a young girl with all those men staring at me. But I walked up to the counter confidently and said, “I’m here to get my car done.”

The cashier guy said, “What do you want done?”

Yikes. What the heck kind of question was that? I racked my brain, but I didn’t know how to answer, so I said, “Well . . . I don’t know. What is it you do?” All the men stood around laughing. This is a true story. Years passed before Joe asked me to go to a car place again.

That’s when the next car incident occurred. We had an honest mechanic, despite living in New Jersey, so when Joe said my car desperately needed an oil change, I decided to take care of it. I took my three little sons (all under age five) with me to Factory Tune in Williamstown and asked the mechanic to work on my car. Wouldn’t Joe be surprised when he got home?

Well, surprised he was! He took one look at the Visa receipt and said, “What the heck did you do to the car, honey-bunch?” He really used worse expletives, but I’m keeping this clean for the youngsters.

“I got the oil changed for you!” I responded, still clueless.

Long story short, I asked for a tune-up, thinking that meant the same thing as an oil change. Who’d have thought those two aren’t synonyms? It explained why I did so poorly on the SATs. Joe was not happy. He cannot abide improper word usage. He decided to get the oil changed himself the next day, and I retook the SATs to improve my score. I was just glad no one got hurt this time.

So then we adopted a new system. Joe handles all things to do with cars. Now and then he explains automotive things to me, but it’s hard for me to understand since I don't listen. Luckily, we’ve been married a long time, so he doesn’t really notice what I do anyway. Everybody’s happy.

But going back to my newlywed friends, I love the excitement I see in their eyes. They even smell like happiness and sunshine, and that’s such a nice thing to see. (The smell isn’t so pleasant, though.) I believe all married couples who’ve been together for a long time need to be exposed to newlyweds to get a refresher course in how to appreciate and fully live the moment.

So while we were waiting at Jiffy Lube today, I told my husband about the two happy brides and how they gave me a sense of perspective. I also told Joe that I’m lucky to still be married to my best friend and the only guy in the world I’d want to spend my life with. “I know you are,” he responded as he stared at the hot, young chick who just walked in the store. And so it goes when you’re married for a while. Congratulations my newlywed friends!

Here's some insight into marriage for all of us, married or not:

"My wife and I were happy for twenty years. Then we met." ~ Rodney Dangerfield

"I don't think I'll ever get married again. I'll just find a woman I don't like and give her a house." ~ Lewis Grizzard

"My wife and I had words, but I never got to use mine." ~ Fibber McGee

COMMENTS:
Who would purposely live in Bensalem?
~ Karen

I thought Joe had all those babes. You're saying he's happily married?
~ Steve, PA

Why are all your comments questions?
~ Jackie
Posted by Jackie S. Phillips at 8:03 PM Links to this post