Happy anniversary to Joe, the best husband ever! It feels like just yesterday that we were in our twenties and had to get married after the births of some of our children.

Regardless, I feel so blessed to say that being married to Joe has been so much fun and more wonderful than I ever expected. Yes, it's true that I had extremely low expectations, but whatever.

Thanks for being my soul mate, dear. I hope you got me a very special present to celebrate. 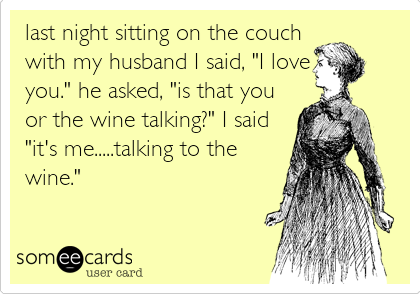 Posted by Jackie S. Phillips at 1:18 PM 2 comments: Links to this post

A Look in the Mirror

Every January, I take a mental journey to take stock of my life. A lot of people do this on New Year’s Eve, before they make resolutions, but I’m ahead of the times, so I do it later. The process involves honest reflection, lots of crying and several glasses of wine. Sometimes I don’t like what I see, but that was just once.

A lot of people can’t handle this kind of introspection because they’re stupid, but I can because I bought extra wine this year. I knew I was in for what could be a very difficult 10 minutes of thought.

In the mom department, I asked myself, “Am I the kind of mom my sons would like to have?” I texted my sons for input. The answer was no. They brought up times I didn’t pick them up from college, forgot their birthdays and other stuff that was equally trivial. Those boys just don’t let things go. Why was I even asking them? Of course I’m a good mom. My son gave me a "World's Best Mom" mug on my first Mother's Day 22 years ago, and that's proof enough. Infants don’t lie.

Next factor. What kind of a wife am I? Hmm, Joe hasn’t asked for a divorce, so one can only conclude that I must be a spectacular wife. Next?

How is my career? Well, there’s a story behind that. Last month Mr. Patel announced he wanted to hire an assistant manager. I called dibs on the job immediately, but my co-workers Dodie and Kibbie said they wanted to apply too. What kind of friends won’t honor calling dibs? I was furious – and worried. I knew these women had a better chance of getting the job because they are well-liked.

Kibbie is in her 20s, good looking and flirty. All she has to do is smile, and Mr. Patel is putty in her hands. As expected, Mr. Patel offered her the job just minutes after he announced the position. However, in a twist of good luck, she failed a simple literacy test (which was actually just an eye chart), and POW, she was knocked out of the competition. Ha!

It was down to Dodie and me, which made me sweat. Dodie is popular because she’s friendly, dependable and looks like a grandma. That’s tough competition! Who doesn’t like a grandma? I’m only a year younger than Dodie, but I was cursed with youthful good looks, so how could I possibly compete against that? By exposing any skeletons in her closet! Dodie had to have some horrible secret she was hiding. Nobody gives out banana bread at Christmas unless they’re hiding something dark.

I went to Bob, the lanky night clerk with the foreign accent, to see if he knew about Dodie's evil side. As I neared the door to the stock room, I could hear him talking to the creepy cashier with the greasy hair. “If Jackie gets that job, I’m going to quit. She’s always mean.” I wondered if he was joking. It’s hard to tell when someone who speaks broken English is trying to be serious. I wanted to yell, “Speak American!” but Bob didn’t know I was listening.

After that, I knew my only shot was to speak directly to Mr. Patel. The next morning, I barged into his office before my shift started and began reading nervously from my prepared note cards. “Do not hire Dodie. She is so old that someone mistook her for a mummy when she was touring the museum,” I said. Then I looked up to find Mr. Patel was not alone. He was in a passionate embrace with his wife’s hairstylist. My mouth dropped. Their mouths dropped too, and we all froze for a moment. Clearly my speech was doing the trick. Seconds later, Mr. Patel gathered the employees on the Quickie Mart floor and announced that I got the job.

“Look at me. Look at me!” I said to lanky Bob. “I'm the captain now!” Thank goodness I saw that Captain Phillips commercial or I wouldn’t have known what to say.

So, yes, I’ve been at the Quickie Mart for almost 20 years and this is the first promotion I’ve ever gotten. How’s my career going? Awesome!

To sum up, I passed my introspection this year with flying colors, and feel like a winner once again! Happy New Year, and I hope you are all winners too!
Posted by Jackie S. Phillips at 6:24 PM 10 comments: Links to this post