I consider myself a pretty normal person, but now I think I’ve joined the ranks of “nerds,” no offense to all you nerds out there, sons. It’s not that I think I’m better than you, but if you are one of those people who liked the Netflix series called Iron Fist, then maybe I am better than you. Let me explain.

A long time ago, I was forced to see the Marvel movie Iron Man with my children. It was so boring and badly written that I wanted to walk out of the theater and sever all ties with my sons there and then. (But I didn't, and I hope they remember that on Mother's Day.) I don’t know the actual length of the movie, but it felt like it lasted weeks.

So when my friend "Derek" invited me over to watch a couple episodes of another Marvel series, Daredevil, I was open minded, but simultaneously prepared mentally for hours of agony. I wondered if this was my penance for all the bad things I’ve done in my life. I hesitantly started watching, and though you may think I would be disappointed again, au contraire, dear reader, it turned out to be . . . excellent! 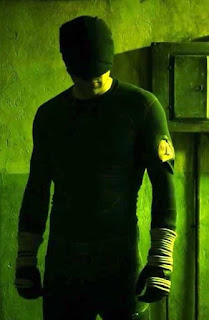 If you enjoy action films but haven’t seen the Daredevil Netflix series, it’s most definitely worth watching. “Daredevil” is a lawyer by day, vigilante by night who wears a mask and beats up bad guys. After getting used to the whole vigilante thing, he invests in a full superhero costume, which is another story. But don’t let the costume distract you.

The most amazing part is that he’s blind and does all of this martial arts fighting and stuff without vision – and never even trips or stumbles on stuff scattered on the ground. It’s impressive. I’ve got vision in both eyes, double vision if you will, and I trip constantly. There doesn’t even have to be an obstacle on the floor.

And even with strong vision, I’ve never been able to beat up anyone. In school, I was voted “Most Likely to Not Beat Up Anyone.”

Daredevil has a really cool premise. It’s the age-old story of good versus evil, sprinkled with humor, depth, unexpected twists and turns, and likeable characters. It was so good that I moved on to seeing the subsequent shows in the franchise, Jessica Jones and Luke Cage, vastly different, yet equally engaging.

But all good things must come to an end – and by that, I am referring to the next saga in the series, Iron Fist. Described in one word, the series is “blech.”

“Iron Fist” is really some kid named Danny who was raised by monks after surviving a plane crash, and he is trained to be a master kung fu fighter. His superpower is that if he gets really, really focused and Jupiter lines up with the moon just right, and it’s the first Tuesday of the month, THEN he can summon some super power where his fist turns yellow for about five seconds an episode. Which gives him the power to punch someone and blast them out of the scene. That’s it. No more. 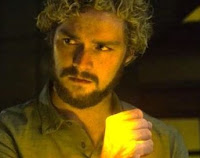 The rest of the time, Danny spends stressing, second-guessing and whining and feeling bad about whomever he punched. He’s like the kid at school who you knew was good hearted, but you couldn’t bring yourself to sit next to him in the lunch room because he was so exhausting.

The character becomes progressively more annoying with each episode to the point that you begin to sympathize with the bad guys and root for them to finally kill him off. As I’ve told you, I’m normally a nice person, but the way this show turned me upside down, where I started rooting for evil people, seemed like bad juju.

As a result, after consulting with my priest and the cashier at the Wendy’s drive-thru window, I decided not to watch the series anymore and skipped right to The Defenders. I’ll let you know how that goes. (I probably won’t.)

Anyway, phew! I know there is a lot going on in the world, but this topic warranted putting pen to paper, as I needed to get this off my chest. If you want to escape this hellish anguish I’ve described, do not watch Iron Fist. But do try out Daredevil. It’s pretty captivating!

Posted by Jackie S. Phillips at 12:24 PM 3 comments: Links to this post