We got yet another day off work and school due to snow after my last “Snow Day” posting. I took it as a sign that God must have wanted me to write more about snow.

I considered listing the hundreds of words that Eskimos have for “snow,” but as the day unfolded, other events became a more worthy subject for this posting

Anyway, I should clarify that the day was icy, not snowy. That was terrific because it meant my sons were entrapped in the house with me. It was too icy to drive. I was delighted we were all together in the daytime, like when the kids were little, so I did what any mother would do. I made five pounds of meatballs and homemade sauce. I froze about eighty of the meatballs, which we will eat until Y3K. I also overbaked and burned a batch of oatmeal cookies. We bounced a few cookies on the floor to see if they would break. They remained intact, so we ate them. We threw the others in the trash, of course.

The kids ventured outdoors in the afternoon, only to find that the driveway was literally a sheet of ice. They could stand still at the top of our slanted driveway and slide all the way down to the bottom. Trying to get back up to our house kept them busy for 15 minutes, and then trying to get in the house after I locked the front door took another hour and a threat that they would call the cops on me again. 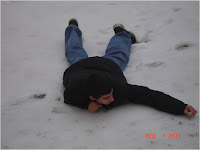 Alfredo, my youngest son, who happens to weigh more than a small bear, went into the backyard where there was a foot of snow so frozen that his weight couldn’t crack it. He tried to make snow angels in the ice laying belly down in the snow (he’s not well versed in snow-angel making) and somehow emerged with a deeply cut palm and hand. There was blood everywhere. It’s embarrassing when your kid gets injured making snow angels. I sent him to his room and told him to think about what he had done.

Meanwhile, I checked on another son who had to ice his thumb because he hurt it bowling two days before. He could barely move the thumb, and he retold his story several times, each time adding more drama and intrigue to the part where he releases the ball improperly. Riveting, yes. Still, I sent him to his room too for incurring another embarrassing injury. It’s bad enough to have the snow-angel injury, but the dropping-a-ball injury was even worse. We told him to "man up" his tale a bit by telling people he was in a knife fight. He spent the rest of the afternoon practicing his story in front of a mirror.

Later in the day, as the sun was setting, the snow-angel son ventured out again, this time to the mailbox at the end of the icy driveway. He slipped and took a hard fall on the ice right by the street, hurting his shoulder and arm quite badly. The poor fellow couldn’t even move it without pain. I became more and more upset as he told me what happened because he was interrupting a wonderful Seinfeld episode, and we missed finding out what the Soup Nazi said to George when George refused to pay for the free bread. I always tell the boys not to interrupt me when I’m watching TV, but the youngest son refuses to mind the rules of our home. Exasperating! I took the ice from the thumb son and gave it to the snow-angel son. Then I threatened the oldest boy not to move the rest of the evening or at least until my husband got home.

When Joe got home, we got to tell him all our adventures over a nice dinner of meatball sandwiches with homemade sauce. We gave the injured boys a couple Advils each and suggested that the uninjured son take a couple Advils as a preventative measure. He began choking as he swallowed it, but a playful slap on the back from the boy with the injured shoulder got that Advil down his throat. And, by the way, taking Advil as preventative medicine really works -- the oldest son remained unscathed the rest of the evening. Then we turned on the TV, and guess what was on? Another channel was playing the Seinfeld Soup Nazi episode. ("No soup for you!") It turned out to be a great ending to another fun day. And, as if life wasn’t terrific enough already, school and work were called off again the next day due to the icy weather! Now that’s what I call a happy ending!

Have a great evening!
Jackie
Posted by Jackie S. Phillips at 8:50 PM

-an Austrian living in the metropolis of Gambier

Your son who supposedly hurt his shoulder is faking it.

You're not supposed to make a snow angel with one arm tucked in.

No YOU'RE faking it!